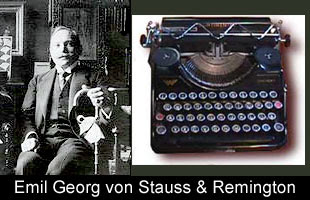 Von Stauss, a principal Nazi Party fundraiser, also was a longtime business associate of the Rothschilds.

Hitler dictated "Mein Kampf" to typists Rudolf Hess and Emil Maurice during his cushy eight-months stay at Landsberg Prison in April-December 1924. (His five-year sentence was commuted. He had a two-room suite with a view and was allowed to receive gifts and visitors.)

Von Stauss was part of a "Hitler support group" consisting of wealthy Illuminati. Helene Bechstein, the wife of the piano manufacturer pretended to be Hitler's adopted mother and smuggled out sections of the manuscript. She took care of all Hitler's expenses and hoped he would marry her daughter Lotte. Franz Thyssen, the chairman of United Steelworks sent Hitler a birthday gift of 100,000 gold marks.

This account is taken from Rudolf Hess' letters by Belgian author Stan Lauryssens, ("The Man Who Invented the Third Reich" 1999, pp.130-135.)

It contradicts the image we have of Hitler in 1924 leading a grass roots fringe party. In fact, he was a front man for the international bankers he pretended to oppose. But if we read the "The Protocols of Zion" carefully, we shouldn't be surprised.

The Secret Masonry is setting up "our own, to all appearance, off position, which in at least one of its organs will present what looks like the very antipodes to us. Our real opponents at heart will accept this simulated opposition as their own and will show us their cards." (Protocol 12.11)

Both Nazism and Communism were fake opposition concocted by Illuminati bankers. As we are dragged kicking and screaming into the next world war, let's recall that the people who issue our currency are behind every war and control both sides.


The Deutsch Bank helped to create Hitler because he represented war profit. (Branch managers and executives belonged to the Nazi Party.) During the Second World War, the Deutsche Bank profited when it took over banks and industries in occupied countries, "Aryanized" Jewish-owned businesses, and confiscated Jewish accounts. (See Harold James, "The Deutsche Bank and the Nazi Economic War Against the Jews" 2001.)

Before becoming president of the bank, Von Stauss was General Director of Steaua Romana, a Romanian oil company owned by the bank. He was Managing Director of the European Petroleum Union, (EPU), an oil cartel. The E.P.U. was "an international association of industrialists whose object was to make the greatest possible profit on their products."


After the Nazi seizure of power, Von Stauss coordinated the war buildup at major German corporations such as Daimler Benz and BMW, who were connected to Deutsch Bank.

One book describes him as "an enigmatic character of the Wiemar and National Socialist periods, albeit one who has rarely been given his due in historical studies." While a major supporter, he never became a member of the Nazi Party and "always maintained good relations with prominent economic figures who were Jews such as his colleague Oscar Wassermann at the Deutsch Bank." (David Bankier ed. "Probing the Depth of German Anti Semitism," 2000, pp 256-257.)

Nevertheless he was instrumental in Aryanizing Jewish assets, even those of Jews who had long ago converted and intermarried. Clearly there were in-Jews and out-Jews, i.e. Illuminati or not.

War is the centerpiece of the bankers' longterm plan to decimate, degrade and enslave humanity, which is necessary to protect their fraudulent world monopoly over our credit. This logic explains the real meaning of "revolution," and why they consider war "revolutionary."

Mankind is stymied because a tiny clique usurped control of money making. This began when gold dealers realized they could issue receipts for gold they didn't have. They became bankers who figured they could also issue more loans than they have money, by a simple bookkeeping entry.

They used this Golden Goose to take control of the world's wealth and put accomplices in charge of government, media and education. They arranged for our national governments to guarantee the paper they print.

War distracts us from this state of affairs, degrades, brutalizes, and increases debt and profits. (The bankers naturally put most faith in government debt.) Central bankers also love socialism. They buy people with their own debt.

Woodrow Wilson was a pawn of this "money power." But to save his soul, he said American industrialists are afraid of "a power somewhere, so organized, so subtle, so watchful, so interlocked, so complete, so pervasive" that they dared not speak above their breath.

"The great monopoly in this country is the monopoly of big credits. A great industrial nation is controlled by its system of credits. The growth of the nation, therefore, and all of our activities, are in the hands of a few men who chill and check and destroy genuine economic freedom." (Robertson, Human Ecology, p. 166.)


War, including the "war on terror", is designed to create a world police state to protect the central banker monopoly on power and wealth. With the exception of Ron Paul and Dennis Kucinich, it doesn’t really matter who gets elected. They all work for the central bankers.

The Illuminati bankers sacrificed Jews when they created Nazism, Communism and Zionism. If necessary, they will do so again to create their New World Order.

Masons, Bilderbergs, Jesuits and Zionists are all empowered by the bankers. Mankind will never get on the right foot until bankers turn over their power to create money using our credit. In the meantime, our lives are shaped by a series of fantastic hoaxes, not the least of which is war.
By Henry Makow Ph.D.
http://www.savethemales.ca/002071.html

Wow, amazing, it's all so clear now. The bankers want to destroy the economies so all their clients and themselves will go out of business. And then they will be poorer. I get it now.

absurd thought -
God of the Universe loves
a Jewish conspiracy

they created Mohammad
put Jihad in the Koran
.

>The bankers want to destroy the economies so all their clients and themselves will go out of business. And then they will be poorer.

their clients only - because what you consider "themselves" is actually poor and deluded middle class jewish population. themselves may extend to their friends and families but not totally self-destruct. replace themselves with "others" and you'll get the point. they don't end up poorer. they end in control of more industry and lifestock.

ya'll are very ignorant assholes here on this site. and it is NOT KNOWN who fucked alois mommy. she was a commoner who put out for everyone. so you dont know who the daddy was. i doubt it was frankenberger or rothschild, except maybe to fuck her for one night.... as if she was worth anything the old whore, she was lucky to have had it from anyone at all...

If you have a history of illness that is difficult to recover, maybe our next article will help you to recover