It is urgent that each of us understand what may be about to transpire:

(1) Israel's Air Force and Navy armed with missiles and munitions provided to them by the U.S.A., will attack and severely damage one of our U.S. carriers, killing many of our servicemen.
(Precedents: USS Liberty, Golf of Tonkin... or even a terror like that of 911 )

(2) The savage attack will be blamed on Iran and its Prime Minister Ahmadinejad.

(3) The U.S. will launch massive air counterstrikes and naval bombardments at Iran, targeting that nation's entire military and economic infrastructure.

(4) The U.S. and Israel will simultaneously execute a media propaganda blitz to persuade the U.S. populace and the world that Iran is an aggressor, that Ahmadinejad is another Hitler, and that the U.S. military actions were simply counter-retaliation for Iran's "Pearl Harbor-like" assault on a U.S.A. vessel.

Israeli Prime Minister Olmert is, and with high-level Jewish Illuminati briefed their servants Bushco. Could it be that this Iran war scenario is at the top of their agenda? This is the only explanation to the great Armada of the US war machine in the Persian Gulf 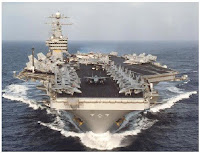 Meanwhile, President Bush is now off on an extended jaunt to Asia and Europe. According to press reports, he stopped off in Moscow to meet with Russia's President Putin. In Europe, Bush will confer with NATO leaders. Again, we see the handwriting on the wall. They're getting their ducks all in a row to terminate Iran as a potential counter to Israel.

The Pelosi-Reid-Clinton-Schumer Congress will not object. I suspect they have already been briefed on what is to come. The nation's elected representatives are in the pocket of AIPAC and the Jewish Lobby.

The Fourth Carrier That Bush Sent To The Gulf

The Straights Of Hormuz Are A Very Dangerous Place

Kity Hawk Is Based In Yokosuka Japan