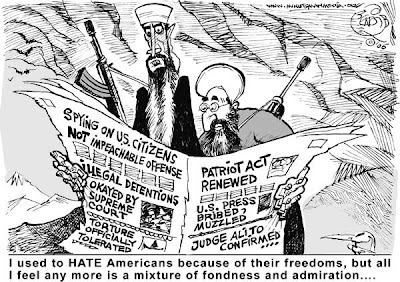 Slowly but surely the Main Stream Media is coming out of its cocoon to see the light of the truth. Wednesday April 18, 2007 Edmonton Sun's article


An unbiased observer doesn't need to look beyond what's happening on the ground today in Iraq and Afghanistan to conclude the War on Terror has been a brutal, manipulative means to a transparently self-serving end.

None of this is news, however, to proponents of "9/11 Truth," a worldwide movement that seems to keep growing despite an unofficial media blackout on their questions and investigations. So what are these "Truthers" saying?

Many people were quick to declare 9/11 a possible "inside job" based on the visible facts themselves, in particular the blanket failure of air defense, which even former Minnesota governor Jesse Ventura said defied all logic and precedent. They also seized on the history (largely unknown in North America) of Pentagon-linked "false-flag" terrorist attacks in Europe during the Cold War, and CIA involvement with al-Qaida operations.

With the invasions of Afghanistan and Iraq, it was seen that 9/11 was amazingly fortuitous to the Bush administration, elements of which had been looking for excuses to invade both countries -- for purely strategic-commercial reasons -- in the months and years prior to the attacks.

But it was the release of the 9/11 Commission Report in 2004 that breathed full life into the 9/11 Truth Movement -- because it was now apparent to many that the "official story" relied on massive distortion and evasion.

The most dramatically disputed aspect of 9/11 is the question of what the world really saw that day in New York City, when three steel-frame high-rises -- the 110-storey Twin Towers and the 47-storey WTC 7 -- collapsed at near free-fall speed neatly into their own footprints.

In 9/11 and American Empire: Intellectuals Speak Out (Olive Branch Press, 2007), former Brigham Young University physics professor Steven Jones argues forcefully that the nature of the collapses, the presence of large pools of molten metal in the basements of all three buildings, witness accounts of hearing explosions -- that these and other factors point to the conclusion all three buildings were brought down by controlled demolition.

This view, though rejected by Popular Mechanics and defenders of the status quo, has won support from engineers and academics from other disciplines. For instance, John McMurtry, a philosophy professor emeritus at the University of Guelph and fellow of the Royal Society of Canada, credits Prof. John Valleau of the Chemistry-Physics Research Group at University of Toronto for drawing his attention to "this scientific anomaly." McMurtry concludes: "The instant and inexplicable collapses of the WTC buildings in uniform demolition style could not be explained by fire (plus, in the case of the Twin Towers, the impact of the airplanes) without contradicting the laws of engineering physics."

David Ray Griffin, a former theology professor from California who has become a leading voice of 9/11 dissent, also points to the destruction of evidence after the collapse -- most of the steel was quickly hauled away and shipped to Asia, where it was melted down.

"Although it is normally a federal offence to remove evidence from a crime scene, the removal of the steel, which was carefully overseen, was facilitated by federal officials," Griffin wrote.

You can see why these scholars are calling for an independent, preferably international investigation into 9/11.

I love the way you write and share your niche! Very interesting and different! Keep it coming!
click to investigate

There's no doubt i would fully rate it after i read what is the idea about this article. You did a nice job..
read this post here