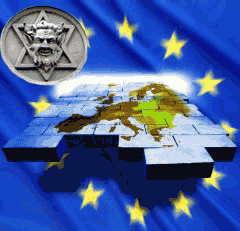 European Union Justice and Interior ministers are set to agree Thursday on a EU-wide anti-racism compromise law which has been debated since 2003.

Citing its particular historic responsibility due to its Nazi past, Germany, which took over the EU presidency in January, had proposed the other EU member states adopt a legislation that would make racism and xenophobia as well as Holocaust denial a crime in the whole European Union.

But while unanimous in their condemnation of those who deny the Holocaust, EU leaders were split over whether to criminalise such acts.

Two years ago, Luxembourg tried to use its EU presidency to push through legislation to unify legal standards for Holocaust denial but was blocked by Italy, Britain and Denmark on the grounds that the proposed rules breached freedom of speech and civil liberties.

Such legislation requires unanimity among the 27 EU member states.

Under the new legislation, pushed by the German presidency, offenders will face up to three years in jail for stirring-up racial hatred or denying acts of genocide, such as the Holocaust.

The latest draft text to be submitted on Thursday to the ministers in Luxembourg foresees an EU-wide jail sentence of at least one to three years for "publicly inciting to violence or hatred, directed against a group of persons or a member of such a group defined by reference to race, colour, religion, descent or national or ethnic origin."

The same rules would also apply to people "publicly condoning, denying, or grossly trivialising crimes of genocide, crimes against humanity and war crimes" as defined by international crime courts and in the charter of the Nuremberg court.

According to press reports, the text wording has been carefully chosen to only include denial of the Holocaust during WWII, as well as the genocide in Rwanda in 1994, but would not criminalise denying mass killings of Armenians during the Ottoman empire in 1915, something that Turkey, a EU membership candidate, strongly opposes.
"The draft is the lowest common denominator which respects the national legal systems relating to freedom of expression," diplomats said.

Holocaust denial is already punishable in Germany, Austria, Belgium, France and Spain, while Britain, Ireland and the Scandinavian states it is allowed under freedom of speech rules unless it specifically incites racial hatred.

Poland and the Baltic countries continue to hold on to their demand that "crimes under the Stalin regime in the former Soviet Union" become part of the new legislation, something which is opposed by many countries.

Despite repeated appeals by EU leaders to fight it, anti-Semitism has been reported as being on the rise in Europe in the latest years, especially in France, the UK and Germany, the countries with the largest Jewish communities.

According to the latest study published on Monday by the Tel Aviv university, the sharpest rise in anti-Semitic incidents in 2006 was registered in Britain, with a 60 percent increase in overall attacks and a 37 percent increase in violent attacks against individuals, a 20-year peak.

The report by the Stephen Roth Institute for the Study of anti-Semitism and Racism attributed the dramatic rise due mainly to Israel’s war against Hezbollah in Lebanon last summer and repeated statements by Iranian President Mahmoud Ahmadinejad questioning the Holocaust and calling for Israel to be wiped off the map.

'Holocaust denial is already a criminal offence in several European countries, including Germany and Austria. It is not a specific crime in Britain, though UK officials said it could already be tackled under existing legislation.

In an attempt to assuage Turkish fears, several EU diplomats said the provisions would not penalise the denial of mass killing of Armenians by Ottoman troops in the aftermath of the 1915 collapse of the Ottoman empire. Turkey strongly rejects claims that this episode amounted to genocide.

The proposal draws what is likely to be a controversial distinction between inciting violence against racial or ethnic groups and against religious groups. Attacks against Muslims, Jews or other faiths will only be penalised if they go on to incite violence against ethnic or racial groups, the draft text states.'

On the other hand Zionist Jews can enjoy all the hate speech and hate crimes against the goy whenever they want. Listen to Rabbi Zumteufelgehen as he reads several racist passages from Jewish religious writings and quotes famous racist Jews just for you:

What is a Goy?


Here Rabbi Zumteufelgehen teaches the Goyim about Jewish mathematics and the racism of the Jews and Zionists, all in one easy to follow lesson. Another great program brought to you by the Cyber Yeshiva