“The Americans just laughed at the agreement put before them to sign, because they didn't want to leave traces of violations of international law and their own constitution. They took us for amateurs and explained that such issues aren’t addressed in formal agreements,” our informant says. Then he adds: “This can now be used as a defense by Polish bureaucrats: ‘the agreement was not signed, so it did not apply.’” 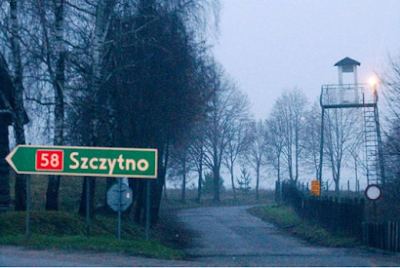 Road to Poland's Szczytno Airport, from which it seems beyond
doubt that ‘renditioned’ detainees were brought to a secret
'extraterritorial' prison run by the CIA, where they were subjected
to ‘enhanced interrogation techniques,’ also known as ‘torture.’

We’re talking about a document created at the end of 2001-beginning of 2002. It was after the attacks of September 11, 2001, when the United States, with the support of its allies (Poland and Britain, among others), marched into Afghanistan to overturn the government of the Taliban, which had sheltered and supported the terrorists of al-Qaeda.

Poland, in addition to providing military support, worked with the U.S. on issues of intelligence. Within the framework of that cooperation, the Polish side agreed to allow CIA aircraft to land at the Szczytno-Szymany International Airport and to permit the detention of terror suspects on the grounds of the Agencja Wywiadu Intelligence Agency Training Center in Stare Kiejkuty [Polish Intelligence training center].

The investigation was transferred to Krakow shortly after the indictment of Zbigniew Siemiątkowski, an Democratic Left Alliance politician who in 2001-2004 was head of Agencja Wywiadu. He is charged with “exceeding his authority” by helping organize an exterritorial center in which CIA detained its captives.

Gazeta Wyborcza, Poland: With Luck, Obama’s Gaffe will Put End to the Issue

Dziennik, Poland: Every Pole Must Protest Until Obama Apologizes


In 2006, when initial reports about “CIA prisons” on European territory appeared in the American press, the government of Poland, among those of other countries, denied the veracity of these reports. The investigation was initiated only after two years went by. It had been stalled. Last April Gazeta Wyborcza and producers of the Panorama program at TVP2 both reported that a breakthrough came after Polish intelligence gave the prosecution materials related to its cooperation with the CIA. Among them is the above-mentioned agreement between Polish and U.S. intelligence services.

The agreement, drafted in both languages, was prepared by the Polish side. It is signed by Zbigniew Siemiątkowski and has a note “CC to Prime Minister” (who was then Leszek Miller). There is also a space for the head of the CIA, which remains empty.

CIA's European Secrets: Clandestine prisons investigated :
A vast network of covert CIA facilities appears to be everywhere in the Middle East, North Africa and Eastern Europe. CIA secret prisons were reported to be operating in Poland and Lithuania, and the controversy over this news has divided Europe and triggered a political crisis in several countries. Are the allegations true?

“This is a problem now, because on the one hand, the agreement is a strong piece of evidence; but on the other, since it hasn’t been signed by the other side, it is not legally binding,” our interlocutor explains. Another, former Polish intelligence officer adds: “In this situation, it was idiotic to archive such a document. It should have been quietly tossed into the shredder long ago.”

But according to Adam Bodnar of the Helsinki Foundation, which monitors the issue of CIA prisoners in Poland, the lack of signature on the document does not nullify its probative value. The fact that such a document was prepared proves there was the will to proceed and that the people who read it knew of its contents. The fact that in the end, these things were likely arranged informally does not matter,” says Bodnar.

Zbigniew Siemiątkowski won’t even comment on the matter. “Everything related to the work of intelligence is covered by [the law] on state secrecy. I would be the last person to break it,” he told Gazeta Wyborcza.

Gazeta Wyborcza: “Is an agreement with your signature but not signed by the Americans legally binding?”

Siemiątkowski:” If my signature is there, that means that the agreement is secret and I can’t talk about it. But to be clear: I do not confirm the existence of such an agreement.”

Former European Parliament MP and now a senator from the Citizen's Platform, Józef Pinior, calls for thorough airing of the issue, has long maintained that reliable sources had informed him of a document confirming the existence of a secret CIA base on our territory.

“It was a very detailed outline of how such a facility should be run from the point of view of Polish government institutions. According to the document, although the center was to be run by the CIA, on the Polish side, the coordination of its activities was the responsibility of civilian intelligence, under the authority of the prime minister. The military was shut out. Until this day, I have not been able to tell whether Polish authorities knew what the Americans were doing there, or is without giving it much though, agreed to its extraterritorial status and gave them a free hand.”

As we reported in May, Polish intelligence officers who were assigned to a secret CIA base at the Stare Kiejkuty training center wrote memos after each oral report made to the president or prime minister. Today, This material is also in the hands of the Polish prosecutor leading the investigation.

According to Helsinki Foundation estimates, between eight and eleven prisoners were kept at Stare Kiejkuty. In the Polish investigation, two of them, both Saudis, Abd al-Rahim Hussein Muhammed Abdu al-Nashiri and Zayna al-Abidin Muhammad Husayn, have been assigned the status of “victims.”

And both now sit at the American base at Guantanamo. They claim to have been imprisoned and tortured in Poland.

Hello. I think that I saw you visited my blog so I got here to? go back the desire? I am attempting to in finding things to enhance my website! I assume its adequate to use some of your ideas !
standa
on ap lioa
standa 10kva
standa 10kva
standa
standa