by Prof. Francis A. Boyle

As long ago as October 19, 2000, the then United Nations Human Rights Commission (now Council) condemned Israel for inflicting “war crimes” and “crimes against humanity” upon the Palestinian people, most of whom are Muslims. The reader has a general idea of what a war crime is, so I am not going to elaborate upon that term here.

But there are different degrees of heinousness for war crimes. In particular are the more serious war crimes denominated “grave breaches” of the Fourth Geneva Convention. Since the outbreak of the first Intifada in 1987, the world has seen those heinous war crimes inflicted every day by Israel against the Palestinian people living in occupied Palestine: e.g., willful killing of Palestinian civilians by the Israeli army and by Israel’s illegal paramilitary settlers. These Israeli “grave breaches” of the Fourth Geneva Convention mandate universal prosecution for the perpetrators and their commanders, whether military or civilian, including and especially Israel’s political leaders.

But I want to focus for a moment on Israel’s “crimes against humanity” against the Palestinian people—as determined by the U.N. Human Rights Commission itself, set up pursuant to the requirements of the United Nations Charter. What are “crimes against humanity”? This concept goes all the way back to the Nuremberg Charter of 1945 for the trial of the major Nazi war criminals in Europe. In the Nuremberg Charter of 1945, drafted by the United States Government, there was created and inserted a new type of international crime specifically intended to deal with the Nazi persecution of the Jewish people:

Crimes against humanity: namely, murder, extermination, enslavement, deportation, and other inhumane acts committed against any civilian population, before or during the war, or persecutions on political, racial or religious grounds in execution of or in connection with any crime within the jurisdiction of the Tribunal, whether or not in violation of the domestic law of the country where perpetrated. 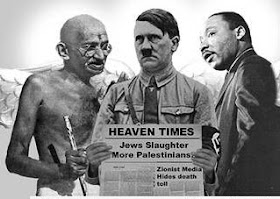 Furthermore, the Nuremberg “crimes against humanity” are the historical and legal precursor to the international crime of genocide as defined by the 1948 Genocide Convention. The theory here was that what Hitler and the Nazis did to the Jewish people was so horrific that it required a special international treaty that would codify and universalize the Nuremberg concept of “crimes against humanity.” And that treaty ultimately became the 1948 Genocide Convention.

Article II of the Genocide Convention defines the international crime of genocide in relevant part as follows:

In the present Convention, genocide means any of the following acts committed with intent to destroy, in whole or in part, a national, ethnical, racial or religious group as such:

(a) Killing members of the group;

(b) Causing serious bodily or mental harm to members of the group;

(c) Deliberately inflicting on the group conditions of life calculated to bring about its physical destruction in whole or in part;

As documented by Israeli historian Ilan Pappe in his seminal book The Ethnic Cleansing of Palestine (2006), Israel’s genocidal policy against the Palestinians has been unremitting, extending from before the very foundation of the State of Israel in 1948, and is ongoing and even intensifying against the 1.5 million Palestinians living in Gaza. Zionism’s “final solution” to Israel’s much touted “demographic threat” allegedly posed by the very existence of the Palestinians has always been genocide.

Article I of the Genocide Convention requires all contracting parties such as the United States “to prevent and to punish” genocide. Yet to the contrary, historically the “Jewish” state’s criminal conduct against the Palestinians has been financed, armed, equipped, supplied and politically supported by the “Christian” United States. Although the United States is a founding sponsor of, and a contracting party to, both the Nuremberg Charter and the Genocide Convention, as well as the United Nations Charter, these legal facts have never made any difference to the United States when it comes to its blank-check support for Israel and their joint and severable criminal mistreatment of the Palestinians—truly the wretched of the earth!

The world has not yet heard even one word uttered by the United States and its NATO allies in favor of “humanitarian intervention” against Israel in order to protect the Palestinian people, let alone a “responsibility to protect” the Palestinians from Zionist/Israeli genocide. The United States, its NATO allies, and the Great Powers on the U.N. Security Council would not even dispatch a U.N. Charter Chapter 6 monitoring force to help protect the Palestinians, let alone even contemplate any type of U.N. Charter Chapter 7 enforcement actions against Israel – shudder the thought!. The doctrine of “humanitarian intervention” so readily espoused elsewhere when U.S. foreign policy goals are allegedly at stake has been clearly proved to be a joke and a fraud when it comes to stopping the ongoing and accelerating Israeli campaign of genocide against the Palestinian people.

Rather than rein in the Israelis—which would be possible just by turning off the funding pipeline—the United States government, the U.S. Congress, and U.S. taxpayers instead support the “Jewish” state to the tune of about 4 billion dollars per year, without whose munificence this instance of genocide – and indeed conceivably the State of Israel itself – would not be possible. What the world witnesses here is (yet another) case of “dishumanitarian intervention” or “humanitarian extermination” by the United States and Israel against the Palestinians and Palestine. In today’s world genocide pays so long as it is done at the behest of the United States and its de jure or de facto allies such as Israel.

Of course miracles can always happen. But I anticipate no fundamental change in America’s support for the Israeli campaign of genocide against the Palestinians during the tenure of the Obama/Clinton administration.


Global Research Articles by Francis A. Boyle
w at 13:49